There's no way to describe what you do to me You just do to me, what you do... 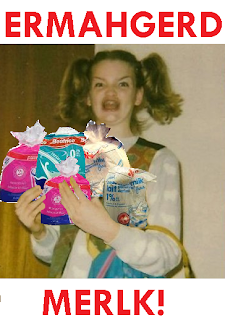 I must go, my pretties.

I need to pee and have a shower.

No, not at the same time.

But I must go.

I'll listen to it later. 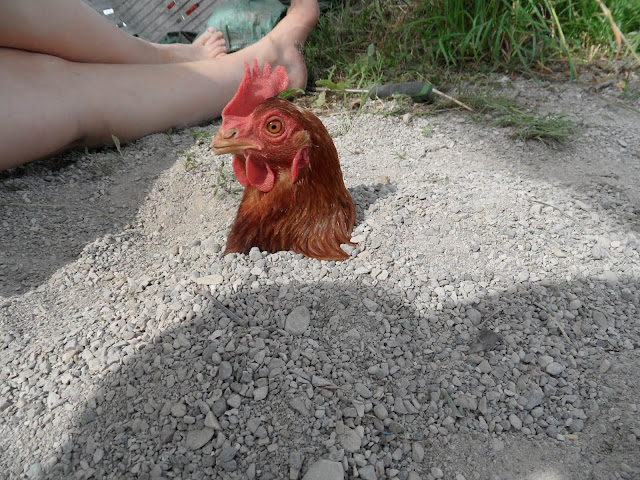 This was exactly a year ago today.

I had to work flippin' late today.

But I love working.

Anyways, I was reading through old blogs comments and I realized how awesome you guys are.
I knew it already, but I need to refresh my awesome-radar once in a while.

And even though I should be canning tomatoes right now, I'm writing words.

In other news, I turned 18.
Marrharrharr.

And then I looked to see how long I've been blogging but got distracted and so it remains a mystery for now.

And yes, someday I will post pictures. I'm a bad person.

For now, you'll have to be content with Hen-in-der-gravel.

I better go help before the world crumbles.

Sorry for the random blather.
I've been up since 4:00am.

This is about the time I start ranting about why Hippos shouldn't fly and WHY ISN'T THERE PUDDING COOKIES??

So bye for now.

You are jelly of my heart-eyed happy face.
Well, be jelly no more, because it's for you!
Peace out yo.

PS: Hippos shouldn't fly because when the poop they spread it freakishly about with their tails in a horrifying manner. Seagulls have NOTHING on them.
Posted by The Paina at 3:11 PM 5 comments:

I got a job! *Cheers*At a dairy farm just down the road. I've loved going out and working since I was 11, so it's SO AWESOME.Anyways, so I'll try and tell you peeps about it.So, there's the big milking room, with like a hall down the middle and to raised platforms. 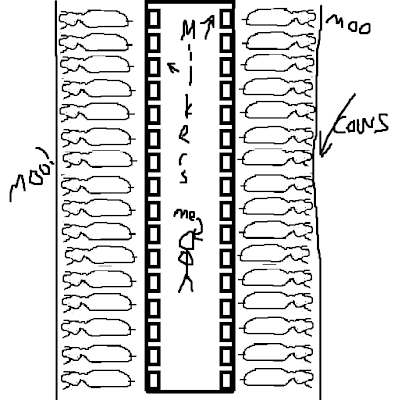 The cows stand there, OR the annoying ones dance from foot to foot.
Everyday they're shufflin'.

There's a cow number, how much milk they have to give, and one more button that my fail teacher didn't annunciate. 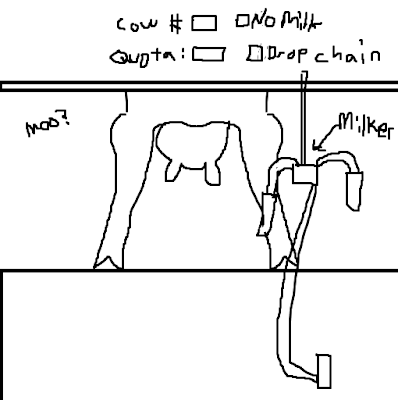 First, you strip the cow (The udder nippleness of it all!) to check for mastitis.
At the end of the day, we lost all sense of order, so one cow I thought another guy had checked, so I hooked it up to the milker.
That cow had BAD mastitis.
So, live an learn.
You have to attach the mastitis cows to buckets rather then the main milker. 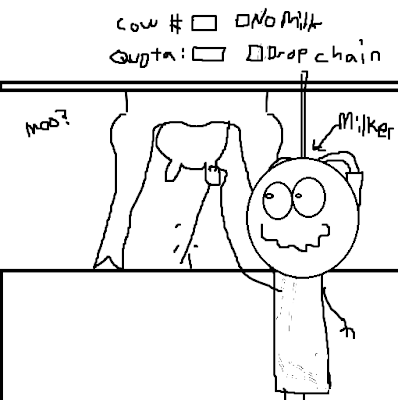 Then you clean the cows udder, with these bacterial wipe things that smell like hand sanitizer.

And you hook up the milker.

Which is basically a pulsing sucking thing, that when they're just laying there aren't on, but if you point them upwards they start sucking. 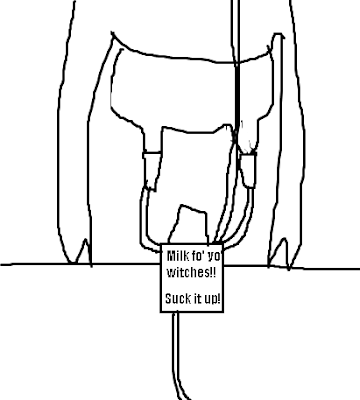 You have to attach all four to the teats (OoOoo, score for term use!) properly, or the teat will twist and that's bad.

Most of the cows stand placidly, but some dance and scratch at the milker and kick your arms so it's difficult. The meanies. >.<
And some have fat nipples which are harder to attach the milker to.
Those ones apparently are more likely to have mastitis so you have to double check them.

They started me off with just 2 cows on each side (There's 16 on each side) But after a few cows they gave me 4. :D
My fail teacher said I picked it up a lot faster then most. *Fist pump*
By the way, my fail teacher was a shy teenage boy.
There's three guys that I worked with, Isaac (Fail teacher) Eli, and Jamie.
Mr. Bennewies and Mrs. Bennewies were there for a while.
Mrs. Bennewies taught me how to strip a cow.
It's a lot harder then it looks!

After one side is done, you start on the other side. While the other side is milking, you teat dip the first side.
Teat dip is this gooey stuff that looks a LOT like blood.
First time I saw it on the cow I had a mini heart attack, but then noticed the guys were going down the line dipping the cows teats.
CHAOS AVERTED!

Some of the cows have weird extra nipples, so you have to be careful to get the right ones and not some growth.

I'm pretty sure Keith (Mr. Bennewies) was pleased with my progress.
Which makes me happy, and more willing to do better.
NO MORE CHUNKY MASTITIS COWS WILL ESCAPE DETECTION.

Anyways, that's all I can remember for now.

Plus, The Mother really want to read this because she's addicted to my RAW ELENANESS.

Oh, and all the peoples pronounce my name right!

Oh, and one more thing:
My fail teacher got peed on while he was attaching a milker.

AHAHAHAHAHAHAHAAA!
So I have to be on guard for that.
Least I follow in Failmasters footsteps.

Cowgirl out!
Go buy some milk!

PS: I have to get up ridiculously early on Monday. Wish me luck!
Posted by The Paina at 9:47 AM 3 comments: