"You're dead if you aim only for kids. Adults are only kids grown up anyway." ~ Walt Disney.

As many of you know, I am a HUGE fan of 'My Little Pony: Friendship is Magic'. In fact, it's actually my favourite show.

I never cared for the previous shows, even though I was the "Appropriate" age for them.

It's a hilarious show with good morals. What's not to love?

Watching 'Criminal Minds' does not make me a sociopath.

And yes, the target of this show is kids. But there's SO much adult humour.

Like, what kid would get when Spike falls into the punch bowl and Pinkie says "Now the punch is SPIKED!!"?
(Which of course was so hysterical.) Not many kids would get that, but *I* did and laughed.

Let's take a look at things that I love which are targeted at kids:

Seriously, you go on youtube and there's trolls who say you're a paedophile. Make videos saying so. It's pathetic, actually.

And I personally am sick of it. It's a cartoon.

Screaming with glee when miniature toys come out is not gay.

Listening to songs from MLP doesn't make you gay. (I hope... *Listens to 'Art of the dress'*)

I'm not saying "Yo bro, I hate you for not liking this show."

I'm saying don't bash me or others who like a show that IS targeted at little girls, but we love anyway.

By the way, I'm not trying to offend anyone because I know we had a discussion at some point about it.

This has been irking me for weeks. Ask Nikki. I told her about it.

And yes, I will continue making MLP shirts. I have...3 now I think.

And they are all awesometastic.

Dude, I'm obsessed with things that argue with eachother...

I already watched the other 2. I might start them again. 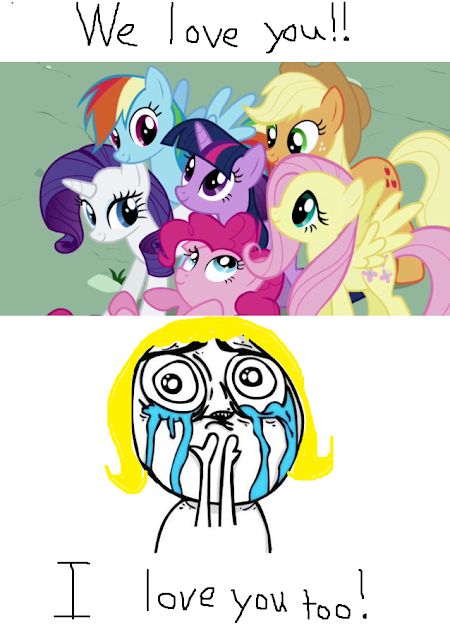 Anyways, I should probably go now. Everyone's on the deck and I'm in front of the computer like some sort of gremlin.

Girlnies? Rather then Bronies? I dunno.

*Gleefully runs with imaginary Applejack* YOU CAN'T STOP MY HAPPINESS!!!!!!

Love and tolerate, The Paina.